As part of the 75th anniversary of Days of Science, NUST MISIS launched a large-scale project: “The School of Young Scientists.”

During the project, meetings were held with the Directors of Institutes aimed at familiarizing themselves with the capabilities of laboratories and centers. Academic mobility programs implemented by the University were also presented.

For six weeks, participants listened to lectures and took master classes on shooting and editing videos about their research work, learned to write theses, designed presentations, and prepared for public speeches, chose magazines for publications and conferences for presentations, and became acquainted with the rules for preparing articles.

Elena Bazanova, Director of the Academic Writing Office, took part in the project as a lector and delivered a presentation on the main principles of Ethics of Science, and also spoke about specific elements of the English language in scientific articles. 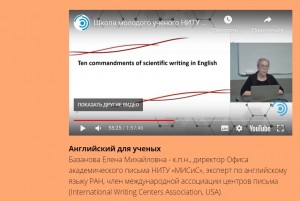